The virtual walk through Ename in the year 1290 is centered around the story of the crosier of Ename, which has been found in 1995 during the archaeological excavation of the abbey church.  Through research, we found that a unique story is hidden in this object, which has been declared Flemish Masterpiece.

This double-sided crosier is the top of the staff of an abbot, symbolising his power and leadership over the monks of his abbey.  It is made of elephant ivory and measures only 6,5 cm. The front side shows Our Lord as Saint Saviour (the Ename abbey is dedicated to Saint Saviour), the back side shows a lady holding a staff, ending as a lily.

The other side of the Ename crosier (photo: pam Ename)

In 1158, the Ename monks elect Arnulf, the prior of the abbey of Affligem, as new abbot to replace abbot Willem, who went on crusade but didn’t return.  In 1164, abbot Arnulf returns to Affligem to lead the abbey there and is replaced by another monk from Affligem named Giselbert.  The abbey at that moment consisted of the original abbey buildings, erected around 1065 and a new abbey church, erected between 1139 and 1149, inspired by the new abbey church of Affligem (erected between 1128 and 1138). 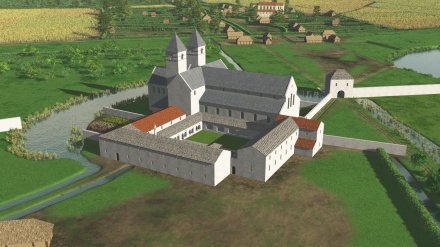 Abbot Giselbert was an erudite man who wrote a continuation of the History of the World by Sigebert of Gembloux (Auctarium Affligemense), documenting the important international events in the period 1149-1164 when he was monk in Affligem, but also mentioning the Ename abbey.  The book is currently in the University of Leiden (ref. LIP2) and contains notes that is has been property of the abbey library of Ename.

Folio 1 verso of the Auctarium Affligemense from the abbey library of Ename, currently in the University Library of Leiden 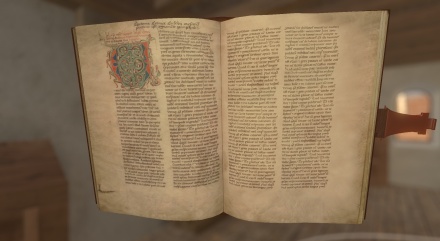 In Affligem, Giselbert could also have encountered Bernard, the charismatic abbot of the new Cistercian abbey of Clairvaux, who resided several times in the abbey in the period 1131-1151.  In 1153, when Bernard dies, there were already 339 Cistercian abbeys. Bernard himself started 160 new abbeys, and many Benedictine abbeys converted to the Cistercian rule. However, the abbeys of Affligem and Ename did not convert but remained Benedictine.  Instead, Giselbert was involved in 1170 in creating a network of 30 Benedictine abbeys, in analogy of the Cistercian cluster of abbeys, but this network failed to materialise.

As abbot in Ename, Giselbert had the old, small abbey buildings replaced by new, spacious buildings from 1170 onwards (zie Berings p. 140). The first phase of this renovation contained the chapter room, the dormitorium, the kitchen, the refectory, the guest quarters and the abbot house, and got finalised around 1175. The records say that the monks were using tents to replace the buildings that were being rebuilt. Abbot Giselbert left Ename at the end of 1176 or in 1177, at the age of 66 or 67, for another unknown abbey.

Unfortunately, the brand new abbey gets inundated severely in 1180 and needs to be rebuilt partially.  In that effort, or shortly after, the abbey is significantly enlarged.  The abbey gets an additional west wing and a new kitchen plus storage room, while the former kitchen is turned into scriptorium plus library.

Let’s have a closer look at the period 1170-1175, when the abbey is being rebuilt.  Philip of Alsace was count of Flanders at that moment (1168-1191) but already in 1157 he succeeded his father Thierry, who was involved in the crusades. Count Philip, like his father Thierry, supported strongly the new Cistercian Order, and had the Flemish Chapel built at the abbey of Clairvaux. When he died in 1192, he was buried in its crypt, next to the monks that lived together with Bernard of Clairvaux, who was declared saint in 1174.  The count of Flanders was the vogt or lay abbot of the Ename abbey throughout its history.

The abbey of Clairvaux around 1200, with the Flemish chapel

Elisabeth Den Hartog, who made an outstanding study about the Ename crosier, dates this ivory masterpiece around 1175 based upon style and form.  The object is full of symbolism, linked to Cistercian themes, although the Ename abbey is and remains Benedictine at that time. So this brings us to the hypothesis that the object is a present of the count of Flanders for abbot Giselbert at the inauguration of the new abbey, in 1175 or 1176, shortly before he leaves the abbey, probably to retire.

Depiction of Saint Salvator at the Saint Servatius church in Maastricht

There are crosiers which are similar, in material and symbolism, to the Ename crosier, for example the 13th century ivory crosier from the Metropolitan Museum of Art in New York (shown below), showing Our Lord on one side and Our Lady on the other.  This also would fit very well with the fact that the Ename abbey was dedicated to Our Lady when founded in 1063, and to Our Lord, when building a new abbey around the Saint Saviour church in 1070. Note also the dragon, trampled by both Our Lord and Our Lady, similar to the Ename crosier.

However, Elisabeth Den Hartog identifies the woman not as Our Lady but as the Bride of Christ, which is a typical Cistercian theme.  Our Lady always wears a crown in the 12th century, while the lady on the Ename crosier wears a diadem.  In the 12th century, Our Lady is nearly always depicted as the mother of Jesus, while the lady on the Ename crosier shows no reference to the child Jesus.  Saint Bernard has written 86 sermons on the Song of Songs, in which the concept of the Bride of Christ, as symbol of the monk, is reiterated many times.

Head of the Bride of Christ, wearing a diadem, the forehead is worn down (photo: pam Ename)

The Ename crosier is quite worn down and even repaired (the two horizontal brass bars keep the broken pieces together), so it must have been passed on from one abbot to the next until the object was too old and totally out of fashion.  Elisabeth Den Hartog states that the staff probably has been buried with one of the abbots in the Ename abbey church at the end of the 14th century. 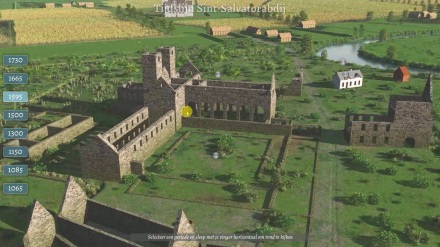 The location of the grave of abbot Gerard Ghuise, buried in 1393 in the abbey church (image: Visual Dimension bvba)

When the abbey graves where plundered at the end of the 16th century – the abbey was deserted and completely destroyed at that time –  the crosier must have been unearthed but discarded on the spot, as ivory was not reusable such as gold or silver.  In 1995, the crosier was unearthed in the north chapel of the abbey church during excavations, as can be seen in this video of the TimeLine application at 01:20, close to the graves of abbot Jan Yserman (1390) and abbot Gerard Ghuise (1393).

This work has been partially funded by the Flemish Ministry of Culture.

3 thoughts on “The story of a Masterpiece – part 1”