The ivory crosier of Ename is an outstanding masterpiece of Flemish Romanesque art. It probably carries a complex and rich symbolism which makes it even more special.  Therefore we have made the crosier the main subject of the Eham 1291 educational game and virtual tour.  This game is completely based upon historical facts, but we have taken the freedom to put some causal links between some facts which are not proven by any historical source.

The repaired crosier is the main subject of the Eham 1291 game (image: © Visual Dimension bvba)

For example, we know that at some point, the Ename crosier had been broken, but continued to be used as it has been meticulously repaired.  We know also that the local lord remained very long in power, not transferring the power to his son.  We link the breaking of the crosier to a quarrel between father and son, although we don’t have any historical proof of that, which is quite normal, even today this kind of information could remain under the radar. 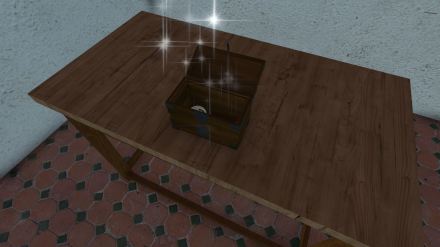 In the game, you need to get the repaired crosier to the abbot (image: © Visual Dimension bvba)

The game is a small quest for the keys of the box, in which the crosier is brought back from the goldsmith who repaired it, and can be played in an hour by a group.  In the game, the symbolism of the crosier is briefly explained.  On the front side, Christ as Saviour (Saint Saviour) symbolises the power of the abbot over his monks. 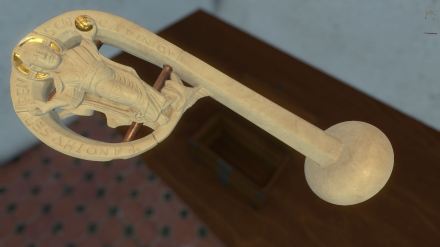 On one side, Christ as Saint Saviour symbolises the power of the abbot over his monks (image: © Visual Dimension bvba)

This symbolism is best represented by the 12th century drawing below, showing the abbot as Christ at the Last Judgement (aka Majestas Domini). The abbot is holding his staff as the symbol of this power to judge and punish monks (the knob is the the symbol for this juridical power) while the staff resembles the stick of a shepherd (that provides guidance and support for the sheep). Note the biting dragons and caged devil!

On the other side, the Bride of Christ carries a lily staff as symbol of virginity, but symbolises also the role of the abbot as caring mother, guiding and protecting his monks. At the same time, she points at the text that probably says “The Bride of Christ, trampling the neck of the dragon”.

On the other side, the Bride of Christ symbolises the care of the abbot for his monks (image: © Visual Dimension bvba)

The dragon is the medieval symbol of the evil in man, so it’s very present in many medieval manuscripts.

This work has been partially funded by the Flemish Ministry of Culture.